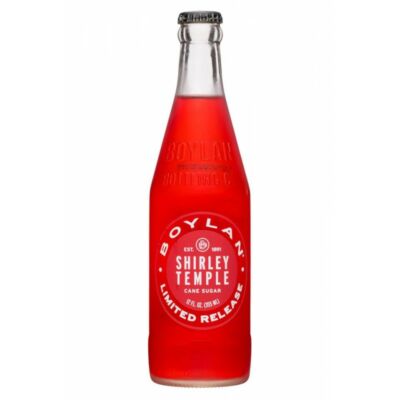 Boylan's story starts in America way back in 1891, when a pharmacist named William Boylan created an elixir in his Paterson, New Jersey, apothecary. He named that serum, a derivative of birch trees, Boylan’s Birch, and began selling individual cups from a barrel in the back of a wagon. In the latter part of the 20th century, Boylan found its greatest success in the distinctive long-neck embossed glass bottles for which the brand has become so well known. Although Birch Beer will always be a big part of the brand’s heritage, Boylan today is best known for its full line of hand-crafted sodas, ranging from our core four Ginger Ale, Root Beer, Black Cherry and Creme sodas, to other popular flavors, including Cane Cola, Orange and Grape. We've brought the full range over from American so you at home in the UK and Europe can try this classic!

Boylan's Shirley Temple Soda is a limited edition release, grab it while you can!

Imported from the USA.