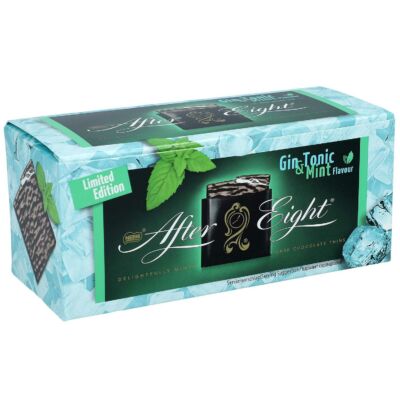 Wafer thin pieces of mint and gin and tonic flavoured fondant wrapped in dark chocolate, each in their own crisp envelope. Each square piece is the perfect balance of soft, refreshing mint and gin and tonic flavoured fondant with thin dark chocolate, making it the finishing touch to any meal. After Eight wafer thin mints are the nation's favourite after dinner mints. After Eight has been at the heart of the British nation since 1962 when it was launched in order to tap into a gap in the market for Rowntree's for After Dinner chocolate mints. Rowntree's therefore decided to develop a wafer thin mint, and After Eight was born. Over the years, there have been several memorable advertising campaigns including, perhaps the most iconic, 'Dinner Party' campaign in 1999 featuring Stephen Fry, Niomi Campbell and Marilyn Monroe. Today, After Eight continues to be a firm British favourite with over 280m individual sweets enjoyed every year in the UK.. Flavoured with 100% natural peppermint oil. Contains no artificial colours, flavours or preservatives. After Eight.