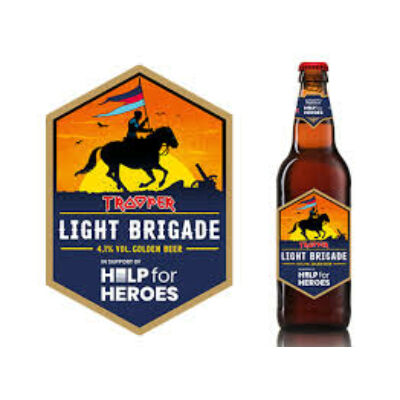 IRON MAIDEN vocalist and ale aficionado Bruce Dickinson and Robinsons’ Head Brewer, Martyn Weeks have crafted LIGHT BRIGADE a unique interpretation of a sessionable golden ale. At 4.1% ABV in 500ml bottle, LIGHT BRIGADE is lower in ABV but still has all the powerful flavours you’d expect from TROOPER.

HELP FOR HEROES met with ROBINSONS in the summer of 2017 to explore the possibility of launching a beer. ROBINSONS and IRON MAIDEN, who jointly launched TROOPER beer almost 5 years ago, which has now sold over 20 million pints worldwide, were immediately enthusiastic about the idea. Indeed, the origin of TROOPER’s name, which comes from the classic IRON MAIDEN song, ‘The Trooper’, based on the Battle of Balaclava of 1854 in the Crimean War, reflects the band’s well-known interest in history.

For each bottle of LIGHT BRIGADE purchased, we will donate 5p to HELP FOR HEROES*

The money raised will help the thousands of Servicemen and women who live with complex wounds and injuries – both physical and mental – and are looking to regain their purpose in life.

So, what are you waiting for? Buy yours now, help our heroes and enjoy a delicious bottle of LIGHT BRIGADE!