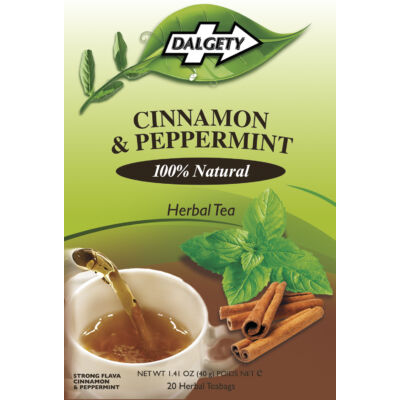 Dalgety Cinnamon & Peppermint herbal tea is a blend of 50% cinnamon and 50% peppermint to create this fragrant, warming spice Herbal Tea with many great health and well-being benefits.

Because of the cinnamon's warming benefits, this tea can be used to combat colds and flu symptoms.

The cinnamon bark contains eugenol, a natural antiseptic to fight bacteria so this is a great herbal tea to help fight against viruses, bacteria and fungi.

Cinnamon is high in polyphenol which can stabilise your sugar level and hence causing you to feel less hungry and cravings, so great as part of a weight loss plan.

Because of cinnamon's anti-inflammatory properties, it can be a tasty way to protect yourself against harmful effects of inflammation.

This herbal tea can also be a great pain reliever.

Traditionally in the Caribbean peppermint tea is a hot beverage drunk after dinner to aid digestion.